Sometimes the people we meet break our hearts a little

Maybe the best thing about Newberry Springs, California, was Christian.

If he lived in Ancient Greece, he would have been a cherub, if a sardonic one. His dark brown hair, probably trimmed at a Cost Cutters, framed expressive brown eyes and the chubby cheeks of a fifth grader. He was hanging around his grandmother’s cafe, fresh off the school bus, helping us kill flies.

“I spend so much time here, it feels like my house,” he said with a sigh as he slumped in a nearby chair, clearly hungry for conversation.

His second home is Bagdad Cafe, a dumpy little place decorated with ripped paper lanterns and T-shirts stapled on the ceiling. While we sipped on cold Coors Lites (me and my Beloved, not Christian), Christian told us that sometimes four tour buses at a time stop to see the place, a stop on Route 66 made famous with a 1987 namesake movie out of Germany starring C.C.H. Pounder and Jack Palance.

Thirty years haven’t been kind to the Bagdad Cafe. Our order began and ended with the beer (to be fair, it was icy cold).

Christian told us his favorite class with his teacher Mr. Cole is science, and he knows how to write Ls in cursive. He’s part Cherokee (“the climbing part”), and he paralyzes flies by spraying them with water before swatting them. 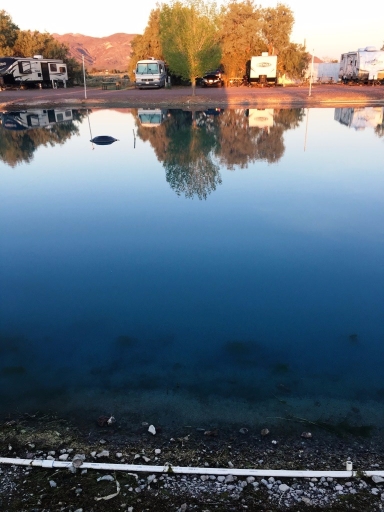 Newberry Springs RV Park. You have to wonder about the origins of any place in the desert with a lagoon.

Before we left Newberry Springs, our first stop a few weeks ago on our trip north through California, we enjoyed another beer at the Barn, where there was underwear stapled to the ceiling and the bartender’s shirt advertised her clear understanding of what inspired good tips. We couldn’t imagine ordering anything from the kitchen there either, but we discovered it was Taco Tuesday at the local American Legion, which looked like it had been standing for decades but was clean and filled with friendly locals. The tacos–beef, chicken or pork–were a buck a piece. Add rice and beans for another buck. They were hot and fresh and mighty tasty. Eventually, we ended up back at the Newberry Mountain RV Park, where the lagoon was unnaturally blue.

But back to the 11-year-old, who chatted with us until we were ready to leave the Bagdad Cafe. As I counted out my change for the beers, he helpfully pointed out that I had more than enough $1s for the $4.35 bill.

“Yeah, but I need a tip,” I said, thinking the server could have used a dollar more than I could.

“You got a tip, Andi!” Christian called out. (Tips were rare around there?)

Christian followed us to the door, and we bid him farewell.

“Nice to meet you,” I said, wondering if Christian would grow up to serve cold beers in this place.

“Are you ever coming back?” he asked hopefully, breaking my heart a tiny bit.

Christian’s brown eyes peeked around the front door, covered from top to bottom with bumper stickers in every language, his eyes following our walk to our truck.

“See ya never, then,” he said and ducked back inside.

A rainbow of pretty Southern plants

Minnesota Transplant has been traveling around the southern United States, lo, these past few days, and she’s discovered some interesting plants she never sees in Minnesota: 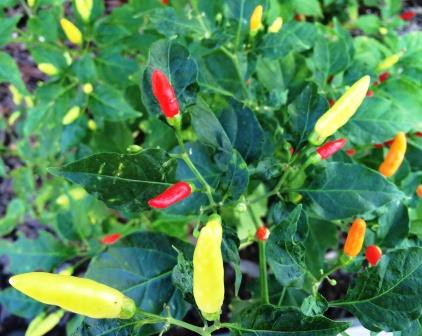 I found these little peppers in the Victory Garden at the World War II museum in New Orleans (it’s a very good museum, as far as wars go —  I definitely recommend beginning with the 4D movie narrated by Tom Hanks — it deftly compresses four years of U.S. involvement in the war to end all wars into about 35 minutes). 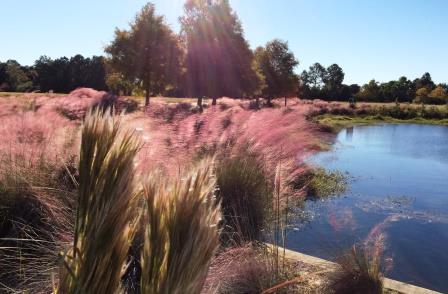 Grass is green in Minnesota and Illinois. Or maybe blue if you’re a fan of Kentucky bluegrass. But it’s never pink. I found this ethereal pink ornamental grass in Gulf Shores, Ala. Wow. I felt like a fairy standing in the midst of these waves of cotton candy. 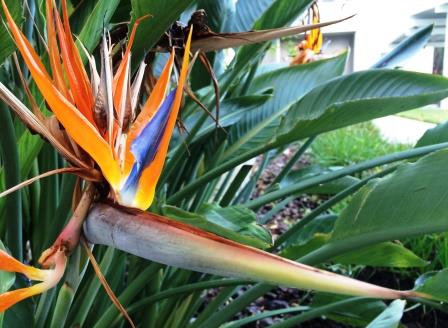 Though it wasn’t snarling, I found a flame-haired dragon in the garden at my husband’s uncle’s place in Tampa, Fla. This tropical beauty spoke to me: Take my picture, please. I complied.

My kind of town, Chicago is

Navy Pier has nothing on this Chicago tourist attraction.

I got this hot tip last week from a member of one of my audiences for “The ABCs of Photo Organization,” and I want to share it with my friends who might visit Chicago at some point.

The Chicago Architecture Foundation is a must-see stop. My parents and I visited today, and we enjoyed it immensely. 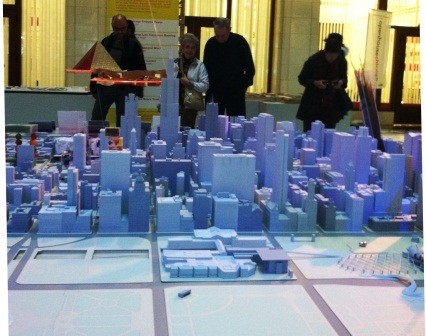 The foundation has an ongoing exhibition of a 320-square-foot, three-dimensional model of downtown Chicago in its atrium gallery at 224 S. Michigan Ave. It’s a way to see all of downtown, all at once. Next door is the foundation’s gift shop, filled with all kinds of interesting inventions (such as cool ergonomic kitchen gadgets), architectural pieces (including LEGOs) and artwork (in the form of stationery and calendars). 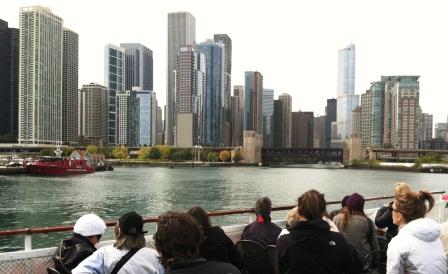 From there, traverse eight blocks to the Chicago River and take the Chicago Architecture Foundation River Cruise. Don’t be duped by the copycats. This cruise has a volunteer docent describing the history and architecture of some of Chicago’s premiere landmarks including the Willis Tower (formerly Sears Tower) and Trump Tower. You’ll come away from the tour feeling smarter and having a much better understanding of Chicago’s skyline.

The displays at the Foundation’s headquarters are free, and the 90-minute river cruise is $38 (day of cruise).

If you’re lucky like we were, you’ll get a blue-sky day and mild temperatures. What a good day!

Don’t miss the water taxis for getting around downtown Chicago. 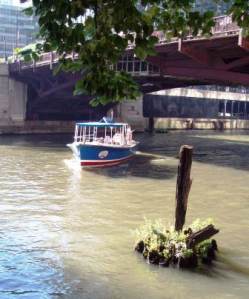 First of all, driving to some destination in downtown Chicago is downright hazardous but even worse is the cost of parking in downtown Chicago. Don’t worry about getting mugged while you’re down there because you’ll feel robbed when you pay $12, $19, $26 or more to park there.

When you take the Metra train downtown from the outer suburbs, you’ll end up at Union Station. From there, you can take a bus almost anywhere or walk a few blocks to the nearest train, also known as the “L” (if you’re already as close as O’Hare or Midway airports, you can catch an L train without having to bother with the Metra system).

If you’re going shopping or visiting Navy Pier, though, check out a water taxi. 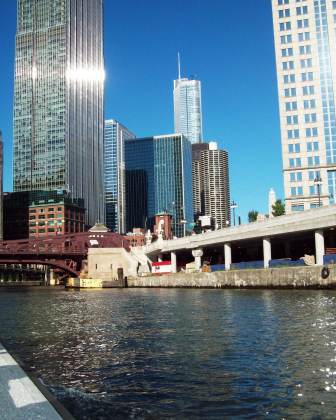 For just $4, you can ride down the Chicago River and see the city from a different perspective. Pick up the Shoreline Sightseeing Water Taxi just across the river from Union Station at 200 South Wacker and get off at Michigan Avenue (right next to the Marilyn Monroe statue) or Navy Pier.

While riding down the river last week, I marveled at the skyscrapers, enjoyed watching stop-and-go traffic and crazy drivers from a safe distance and spied a man in a business suit and sneakers dropping a line in the water. “That’s weird,” I thought. Then on Saturday, I read a Chicago Tribune column about how anglers in the know catch largemouth bass and crayfish in the downtown river all the time. Not only is the river a great alternative form of transportation, it’s a fishing hole, too.

The road less traveled is a great deal and a pretty ride.

The river route is certainly preferable, as it affords good grazing and an abundance of water.