Dear Friend, Here are my hopes for you in the new year

I resolve to treat myself gently in 2015.

Regular readers know I am a resolutions junkie. I make New Year’s Resolutions every year, and some years they even have themes. Sometimes I even stick to them.

It’s the first day of a whole new year, a whole new chance to make good on the potential endowed to me by the Creator. I love a clean slate.

This year, my resolutions spring from my Best Friend Self, described persuasively by Martha Beck in this month’s O Magazine as the “cheerful, kind, patient version” of me. Instead of constantly expecting more of myself and berating myself with an inner dialogue that sounds more like a jerk boss than an ardent fan, I will be my own best friend in 2015.

I’m sharing my resolutions here for two reasons. No. 1, making my resolutions public is a trick to keep me accountable. And No. 2, phrased in the words of a best friend, they sound a lot more appealing than those horrible SMART-list goals (specific, measurable, attainable, realistic and timely — ugh) written by a professional in Human Resources. Maybe they’ll inspire you, too.

Friend, I’m here for you whenever you feel stressed, fat or lazy. You’re doing great. God loves you and so do I. Don’t be so hard on yourself. You ought to slow down, focus on the big stuff and savor the small stuff.

I’m behind you in your writing goals in 2015. Four new independently published books? You can do it. You have two-and-a-half manuscripts in draft form already!

I hope you savor your adventures this year, and the people with whom you enjoy them. Be present. Listen fully. Follow your intuition.

And reading, too — savor it! Spend that last hour before bedtime winding down, reading paper books, instead of playing mindless games of Scrabble on your iPad. Really, nobody is saying anything that important on Facebook after 9 p.m. Sixty-three books in 2015? You can do it.

And I’d love to see your inner artist take flight decorating your home with images of those adventures and loved ones you’re savoring this year. Time to fill those walls in the house and camper with pretty pictures. You deserve it.

You’ve already taken the first step: You expressed your wishes, releasing them into the Universe. Now reward yourself with a nice cup of hot tea. Mm.

I have a producer!

And now I have a producer, too!

I spent the afternoon reading embarrassing excerpts out of diaries written when I was 14 and 15 to two strangers in a downtown Chicago community coffee shop, and now Connie is my producer. That’s what obsessively writing selfish entries about one’s teenage angst gets you. Ha!

Connie will help me prepare to be part of a live show of “Mortified: Angst Written” in Chicago (date to be determined). “Mortified” is a grassroots storytelling forum for adults to share excerpts of the strange and embarrassing things they did as kids as a way to reveal stories about their lives.

Sportin’ a new ‘do

The hair clippings on the floor represent my second haircut of the year.

That’s simply lazy hygiene, I know, but my hair stylist had a baby in April.

Since I’m seeing her so rarely, I asked for something dramatic (dramatic for me anyway). The one who usually says, “just a trim,” asked for a shaggy bob today (I saw it on Pinterest — you can see it here, too).

Anyone else think of Scooby Doo when they read “shaggy bob”? Oh, you and I will get along well.

I’m actually just copying my little sister, who emailed me the Pin after I saw how cute she looked at the family reunion this past weekend. 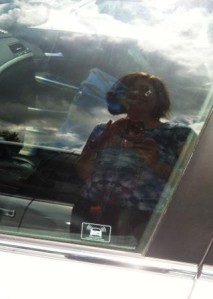 My stylist whacked four or five inches off my hair, and you can see my neck again. Since I’m loathe to publish pictures of myself unless I’m dressed as a Klingon or a beer bottle (no easy links here — you’ll have to search for those gems), here’s an image of me in the reflection of my car window after I emerged from the beauty salon (yes, I’m wearing tie dye).

Velma: There’s a very logical explanation for all this.

Velma: The place is haunted.

Shaggy: Thanks a lot.

Driven to distraction: How to hitch a ride back to Focus Town

Such a crazy day today, and my brain is overflowing. Like tollway by my little village undergoing construction for more lanes, I need more neural pathways to keep track of everything.

I am normally a focused thinker. I wish I could take credit for it, but like my low cholesterol, we can probably attribute this to genetics or good parenting in childhood.

Today was a different story. While juggling house guests, a photo organizing job, a list of things to do that was as long as my arm (and I’m the sort of person whose wrists hang out of my “long” sleeves) and a bunch of errands for my Beloved, I was keeping my eye on my virtual connections because my book was featured in the daily newspaper nearest my hometown. Thanks to that exposure, “The Percussionist’s Wife” climbed to No. 72 among Kindle’s Memoirs & Biographies about Women (No. 1 in that category? Julie Andrews’ “Home: A Memoir of My Early Years”).

That’s all front burner stuff. Meanwhile, in the background, I’m sorting through ideas for my second book. More on that later. Much later. Can’t concentrate right now. Trying to build back-burner neural pathways.

How to get it all done?

That’s my first tip: Mantras. Several times today, I forced myself to remember the next three things to do by chanting them: Finish invoice, feed dog, load of laundry …

Tip No. 2: Lists. I actually wrote down my to-do list three times today.

And No. 3: Run. I was taking steps two at a time more than once today. And the lawn never got mowed so fast.

Big Business is worse than an authoritarian government.

Authoritarianism, for those of you who missed political science in college, is the “principle of unqualified submission to authority, as opposed to individual freedom of thought and action,” according to the Britannica encyclopedia. “As a political system, authoritarianism is antidemocratic in that political power is concentrated in a leader or small elite not constitutionally responsible to those governed.”

If you’ve ever worked for Big Business, you know exactly what I mean. Scott Adams does a fine job of finding humor in Big Business in his comic strip “Dilbert,” but I am not finding a lot of humor in it right now.

I worked for two major newspaper conglomerates early in my career, and my hard-won education and hard work ethic were turned into commodities to be traded on price alone. I was asked to write more, edit more, turn out more stories, more headlines, more news pages, even as my hours were cut and overtime was axed. “Do what you have to do to get it done,” I was told, so the stock holders could see a quarterly profit. When you read many suburban newspapers today, you see the results: Unbalanced news stories, poorly written copy and typos in headlines. Turns out, not everyone can be a reporter or copy editor, but newspapers don’t care as long as they’re selling ad space and the stock price is going up.

I left the Evil Empire when the Princess of Darkness, otherwise known as my editor in chief, started telling me how to design Page 1A. Excuse me? I thought that was my job. Oh, you just want me to push buttons for you because you’re too stupid to learn the software system? Here, take my keyboard. Before I shove up your [expletive].

Then I worked for an employee-owned company that I loved for many years. Only it turned out is wasn’t employee-owned. It was an illusion create by the totalitarians who ran the company and actually owned it. When their exceedingly poor management practices pushed the company in bankruptcy, the owners walked away with something on the lines of $126 million, and my retirement went up in smoke. Poof. Zero value. Don’t let the door hit you on the way out. (They’re being sued right now by the Little People they trampled on the way to the bank.)

I will refrain from trashing my current employer, but let’s just say The Land of Dilbert can be found somewhere in Texas (and I’m writing this on my own time. Ahem.)

Now what’s making me mad about Big Business today is my Beloved’s employer. Which took the time to politely inform him today to remove the pictures of him in his Halloween costume from Facebook. And he may be formally reprimanded for ever allowing them to be posted.

Yes, my Beloved dressed up at Halloween. He was not on company time. He wore a dress. And a beard. It was funny.

Cross-dressing on Halloween for a weekend party is not obscene, illegal or even distasteful. It’s funny. Ha, ha? Get it? It wasn’t even my Beloved who posted the pictures. It was me. His wife! Who was dressed as beer bottle! But I wasn’t holding any beer bottles!

C’mon, people, are you serious? Oh, I see, yes you are. Someone in the HR department has a little bit too much time on their hands. Really, anyone who could be offended by that isn’t going to be buying [censored] from my Beloved anyway. Because if they don’t have a sense of humor, he doesn’t want to be selling to them, the humorless stuffed shirts they are!

Are you looking out for yourself? You might want to do it by looking over your shoulder.