Sun sets Sunday on a sundae

While waiting in the drive-through for the wizards at Culver’s to create my custard sundae topped with peanut butter sauce and Reece’s Peanut Butter Cups (because one kind of peanut butter isn’t enough), I looked out the truck window and the crescent moon cast a spell. 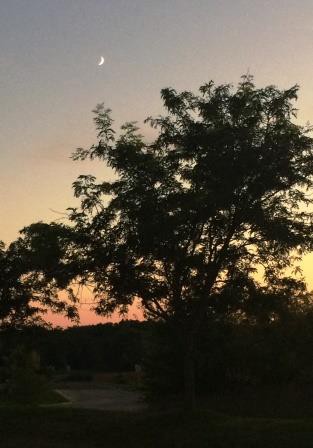 Behold, twilight. I can’t type that word without thinking of Kristen Stewart, the starlet of the movie series based on the books, but there’s no other way to describe it. Beautiful, pink-and-lavender-bathed twilight.

It’s not nighttime, technically, but it’s a lot more evocative than the shot I captured Friday of the camper.

The chill in the air reminds me the leaves on that tree won’t be there for much longer, but this was an evening when an ice cream treat was still appropriate for the season.

“Without ice cream, there would be darkness and chaos.”