Centenarians are rare. According to the 2010 U.S. Census, there were just 53,364 people 100 or older living in the United States. Nine years later, nearly all of them have left this earthly plain. A new, and probably larger group of centenarians has replaced them. In the period 1980 to 2010, the centenarian population experienced a larger percentage increase than did the total population, meaning more Americans than ever are living to this triple-digit age.

I found these and other facts in Centenarians: 2010, a publication of the U.S. Census, and I bothered to look them up in honor of my grandmother, who turns 104 today. 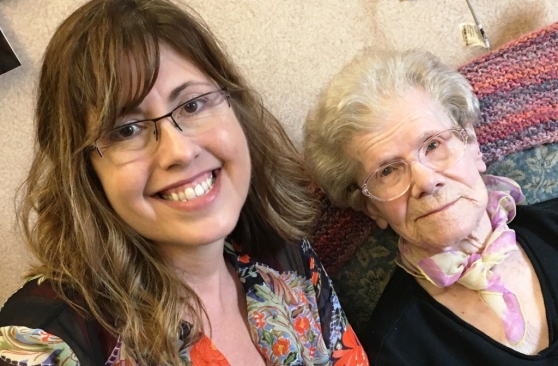 Me and Grandma two years ago during a visit a few weeks after her birthday. Note the scarf: Always fashion conscious.

One-hundred-and-four! Can you imagine? Even she can’t imagine. She has said more than once she doesn’t know why she has lived this long.

As a white woman living these past four years in an elder care facility in north-central Minnesota, Grandma typifies what a centenarian looks like in the United States; 82.8 percent of American centenarians are female, and 82.5 percent of centenarians were white. Almost unbelievably, about a third of centenarians live alone in their household; the rest live with others in the household, in a nursing home or in other group quarters.

When Grandma turned 100, I wrote a blog post with 100 pieces of trivia about her and her life (click here to read it). In summary, she’s a 100% German American farmer’s wife with four children and a host of grandchildren, great-grandchildren and great-great-grandchildren. She’s got a great sense of humor, is a gracious host and has just enough vanity to have kept her in good shape for ten and half decades. The most impressive fact about her this time of year is that she has lived through 104 Minnesota winters; other Minnesotans impressed with their own toughness might tell you frozen storage is why she’s lived so long.

I exchanged letters with Grandma for many years, and I inherited 25 years worth of her daily diaries. She rarely wrote anything emotional or introspective. Mostly, she stuck to the transactional events of her day. Here’s an example from her diary 10 years ago when she turned 94:

Happy Birthday to myself. Woke up in plenty of time to go to church; rode with [a friend] Harley. Got home at 9:20 so took a nap as we left for [daughter] Mary’s at 12 for my birthday party. Very nice. All three [grand]babies born in ’08 were there. … Big gifts. Was home again at 6:30. Was hyper so couldn’t relax but really tired when I went to bed. [Son] Bob called from Hawaii to wish me a happy birthday.

Not sure what “big gifts” meant, but I’m guessing it was gourmet jams, stationery and postage stamps. This sort of encapsulates her formula for longevity: Spirituality, lots of sleep including a daily nap, loving family and gratitude.

In observance of Ash Wednesday, I was asking big questions about life and death this week on Minnesota Transplant. Ash Wednesday is the first day of Lent, a six-week season during which Christians focus on the life and, in particular, the death of Jesus Christ. Check out my entries on Tuesday, Wednesday and Thursday. Tomorrow, I write about repentance–or the lack of it–on my Monica Lee author blog.

I’m the love that you’ve looked for, write to me and escape

A dozen years ago, I nervously dressed for a coffee date. Not too sexy, not too prim. It was a tall order, given the date was in December at a coffee shop in Central Minnesota when down parkas and boots were de rigueur.

I must have pulled it off though because about three sips into my soy latte and small talk, the man who would become My Beloved leaned over the table and kissed me.

I was smitten at that moment. I fell into a deep crevasse, not icy cold but warm and comforting, from which I still haven’t emerged. My Beloved is a big man with a big heart and big dreams. I disappeared, in the greatest possible way, into the whole package. He persuaded me to move away from my home state of Minnesota, he offered me the opportunity to be a mother to his children in a way I hadn’t even realized I would ever want to, he eventually lured me out of a corporate career that had consumed me and he tempts me every day with earthly pleasures like buttery popcorn, bottles—not measly glasses—of wine and juicy steaks (other earthly pleasures, too, but this is a G-rated blog).

My Beloved is a traveler, too, and together we’ve visited so many places. As an international marketing executive, I thought I was well-traveled before I met him. He took me to South America on a cruise; I’d been to every other civilized continent except Antarctica. We marveled at the beauty of the coasts of Croatia, truly one of the most beautiful places on earth. We drove around the Gulf coast from South Padre Island to Fort Myers, Florida, in a 30-year-old RV, and another winter and in another camper, we made our way north from the Florida Keys to Fort Myers over the course of three months. I never spent so many winter days in 80-degree weather as I have since I met him; cold makes him achy, and I benefit when he finds ways to escape it.

More recently, My Beloved used his lion-like fearlessness and beaver-like busyness to rebuild a 127-year-old former Methodist church into our dream home. Renovation projects might spell the end for some marital relationships, but ours is only stronger for persevering through those long dusty days of living in flux and financial juggling.

Back on that first date 12 years ago, we had planned to meet just for coffee, but we ended up walking around the nearby mall, cuddling at a showing of “Casino Royale” and then sharing a table of Thai food. A half-hour commitment turned into a whole day. That great date just flowered without a whole bunch of nail biting and planning and dancing around each other’s predilections.

Our mantra during those early days of our relationship was “If it ain’t easy, it ain’t meant to be.” By easy, I don’t effortless. I mean finding the path with the least hurdles. An extravagant meal, an epic vacation, a whole-house remodel requires effort, for sure, but together, the path has fewer hurdles because we’re headed in the same direction, we bring individual skills to the project and we have each other’s back.

Twelve years ago, I didn’t know I was about to meet a soul mate but I surely did.

And I’m so grateful.

Todays’ headline is a line from Rupert Holmes’ “Escape (The Pina Colada Song).” Who needs a designer coffee; I think I’ll celebrate the anniversary today of our meeting with a pina colada.