Lord, grant me the serenity

The air was brisk this morning as I rode my bike to the gym. A week ago, I was sweating through my shirt; today, my hands got numb. Soon, I’ll be driving my heated car to the gym again to get my workout.

“Fall has always been my favorite season. The time when everything bursts with its last beauty, as if nature had been saving up all year for the grand finale.” 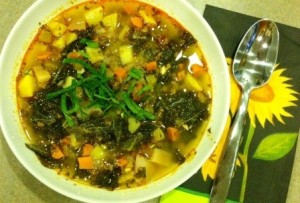 Some Minnesotans adore autumn. My dad is one of them. I get it. Finally, the oppressive, unmoving heat of August is gone. The trees in all their colorful glory are stunning. It’s the season for soup (like the one I made for dinner tonight: Emeril Lagasse’s Kale And Chorizo Soup). And the scent of fall is distinctive. I won’t say it’s lovely because I think autumn musk is the smell of decaying matter and smoke, but it certainly is evocative.

I completely understand why farmers appreciate fall. After warily watching the weather all summer and praying for rain or sun or no hail, a farmer finally gets to harvest his bounty and make some money when autumn comes. My dad grew up on a farm so maybe this perspective colors his view of fall.

But I hate autumn. I hate being cold (I guess I didn’t inherit the right Minnesota gene), and I have nothing good to say about snow, which is coming, coming soon, no matter what fans of fall tell you. “Cold” is synonymous with “dead.” Even the sun is sad when the days are growing shorter.

Mornings like this morning remind me to embrace the heat, to turn my face into the sun, to be grateful for sweat. Because they melt into autumn so quickly.

The pot of gold at the end of autumn’s rainbow

The trees here in northern Illinois are beginning to change colors. Most of them are still green, mind you, but a few trees have changed into the most gloriously colored robes including the golden ash trees across the street and a purple one on my running route.

But these red maples stand out on a clear blue-sky day. A nursery sits on a country corner not far from my house, and this group of trees turned red first. These gorgeously pinkish red sirens are clearly flaming from a mile away.

Beauty for some provides escape, who gain a happiness in eyeing the gorgeous buttocks of the ape or autumn sunsets exquisitely dying.

“‘Where shall I begin, please your Majesty?’ he asked. ‘Begin at the beginning,’ the King said, gravely, ‘and go on till you come to the end. Then stop.'” — Lewis Carroll, author of “Alice’s Adventures in Wonderland”

Autumn is filled with potential and new beginnings. I love that about autumn.

When I was in high school, I spent my Augusts planning and shopping for and buying my new school wardrobe. I felt like the school year was a fresh start on fashion, on my adherence to trends, on my popularity. I never worried about my grades, but my self esteem was built on my appearance, driven primarily by my clothes.

Thank goodness my autumns are no longer pressure-packed popularity contests.

Tyler remarked recently how quickly time passes. I am trying not to let it slip through my fingers by being mindful. (Writing my blog is one way for me to be mindful.) For this adventure in wonderland, we shall begin at the beginning and go on till we come to the end. And then we shall stop.

A walk with cranes and autumn blooms

The mist had settled over the creek bed that runs in front of my parents’ house when Mom and I began our morning walk at 6:30 a.m.

The sun was already bright, but the temperature felt a bit like autumn.

As we walked along, I heard a strange squawk that startled me. It was the call of a sandhill crane, described in Dad’s bird book as a “low, loud musical rattle.”

Though Dad would be quick to point out these large birds are not pre-historic, their call sounded a lot like the Hollywood raptor dinosaurs in “Jurassic Park.”

As we continued to walk along, we spotted three crains in a field. One kept up his “rattling,” perhaps as a warning to the other two that two slow-moving humans were nearby. As we approached, they spread their enormous gray wings and flew off, their breakfast rudely interrupted.

I’m sure Mom and Dad have pointed out the cranes in the marshy meadow in front  of their home before, but I don’t remember it. The cranes’ territory extends across the West and the Great Plains from Canada to Mexico, stopping just at the edge of Illinois. However, when I jog around my little village in northern Illinois, I’m more apt to see a poorly ponded residential yard than a slough full of hungry birds.

Minnesota, after all, is the home of the unique sounding loon. Dad boasts of having an endangered red-headed woodpecker visit his bird feeder. With Dad dumping two pounds of bird seed into it every day, this feeder is like the Old Country Buffet of Birdland. Birds of all sorts flock to it.

Also as we walked along in the cool morning, Mom pointed out the blooming asters and goldenrod.

A sure sign that I was in northern Minnesota, too, if autumn is evident in mid-August. A lovely and picturesque experience once in a while, but back to Illinois I go.