My Beloved asked me today if I’d still cook if we win the lottery tonight (yes, we have our ticket for a chance to win three-quarters of a billion dollars in tonight’s Powerball lottery, do you?).

We’d already discussed hiring a chef. And a butler. And a full-time masseuse. This is what one dreams of when one holds a $2 lottery ticket that has not yet proven worthless.

“I like to cook,” I said. “At least somebody else would clean up the kitchen.”

A few weeks ago, I worked up what I thought was a great idea: Ham & Cheese Manicotti.

Back story: My mother-in-law likes ham and cheese. A lot. I’ve actually seen her eat ham and cheese something-or-other (omelet, sandwich, casserole) three times in one day. For some people, it’s chocolate. For her, it’s ham and cheese. Then not long ago, when I was crawling around in her pantry looking for a box of Zip-locks, I noticed she had not one, not two but three boxes of manicotti hidden in there. So, she likes manicotti a lot, too! What if I created a recipe that married her favorites: Ham & Cheese Manicotti? I’d win her undying affection! I’d be her golden daughter-in-law! (True confession: She’s already quite fond of me. And I, of her. I thought she’d appreciate Ham & Cheese Manicotti; it would be a way to show my love.) 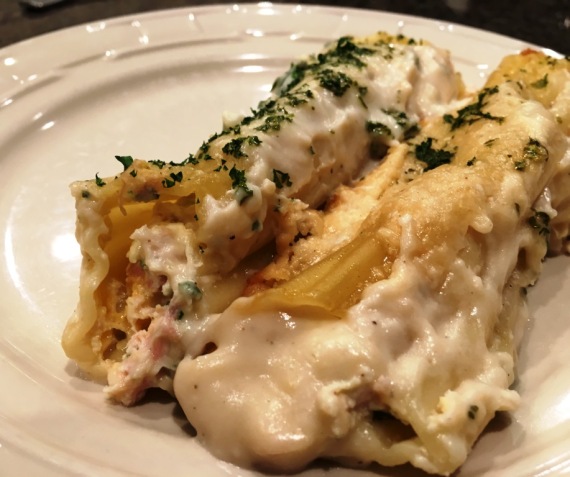 Ham & Cheese Manicotti. Experiment with your own recipe.

So I worked up a recipe that included canned ham (no, not deviled ham–canned ham, like canned tuna), swiss and ricotta cheeses, and bottled alfredo sauce. I whipped it up and tested it out on my Beloved, hoping for a good report so I could make it sometime when I entertained my mother-in-law.

My Beloved hated it. Especially the canned ham. He vowed never to eat it again, even if I changed up the recipe to use regular ham, chopped.

Ever hear of the maxim that eternity is defined by a ham and two people? Well, it’s also defined by seven leftover ham & cheese manicotti and one person. I don’t even like pasta all that much. I ate that stuff for a week, and I still threw away two manicotti. (It wasn’t that bad, for the record. Just too much of a good thing. Or, at least, too much of a so-so thing.)

Here’s hoping I do better with tonight’s lottery numbers. Cheers!

This entry was posted in Uncategorized and tagged Family, Food, Lottery, Recipe. Bookmark the permalink.