Two books: One documents the history of a swamp, the other navigates a quagmire of grief

My favorite assignment in English composition in high school was writing compare-and-contrast papers.

(Only a writer would put “writing a paper” in a favorite things list.)

I like puzzles, and I enjoyed figuring how two pieces of writing were similar or different.

Today on Minnesota Transplant, we shall compare and contrast the two books I finished reading this week: “a book with more than 500 pages” and “a book you can finish in a day,” two check marks in my 2015 Reading Challenge by PopSugar. 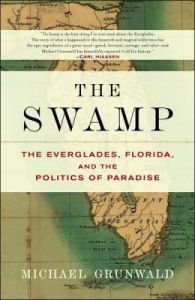 It took me about a month to read author Michael Grunwald’s The Swamp: The Everglades, Florida and the Politics of Paradise (if I’m being honest, the book has only 458 pages, and that includes 81 pages of footnotes I didn’t read, but this my challenge, and I’m rounding up, OK?). I picked it up because I spent a month in Chokoloskee, Florida, in the heart of the Everglades.

If you think Florida is overrun with traffic, people, gated communities and Mickey Mouse, spend a little time in Chokoloskee. It’s quiet, rugged and close to nature.

I’ll be honest with you: It was nice to visit but I wouldn’t want to live there.

Grunwald would probably be happy to hear that. His book is an impressively researched history of the Everglades beginning 300 million years ago and concluding with a complicated pact to “save the Everglades” in 2000 (with a few notes bringing readers up to date in 2006). His premise is that developers, Big Sugar, government and especially the U.S. Army Corps of Engineers have ruined the Everglades, and that the River of Grass — the only place like it in the world — would be best preserved in a completely natural state.

Its natural state is a swamp, rife with bugs and crocodiles and perpetual flooding.

Listen, I appreciate birds and clean water as much as the next person, but I have to confess I’m also a fan of supermarkets and paved roadways. I like green spaces, but I guess I think groomed landscaping can be pretty, too.

I learned a lot about the ecology of this unique chunk of land, but the politics, backroom deals, big money and big egos described in the book were far more sickening to me than the loss of thousands of acres of crocodile breeding grounds. I came away from Grunwald’s tome thinking, “Is development so bad?” 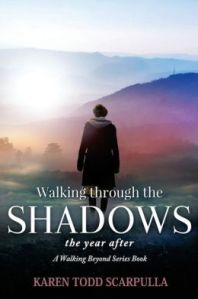 Meanwhile, I finished Karen Todd Scarpulla’s Walking Through the Shadows: The Year After while traveling from the heart of Florida to Alabama.

Scarpulla tells the story of a single year — the year after her ex-husband died — and how she, her teenage children and those around him coped with his passing. She picks up the pieces after spending a year caring for him as he dies of cancer so their son and daughter can get to know him better. Like the Everglades’ crocodiles and money-grubbing developers, Walking Through the Shadows has a few prickly characters and deceitful twists. Hers is a story of forgiveness and making the best of a bad situation (maybe some environmentalists mourning the death of the Everglades could take notes).

Like most memoirs, Walking Through the Shadows tells one person’s perspective, unlike The Swamp, which covers pretty much every angle. Because it reads more like a memoir, I’ll share a full review of Scarpulla’s book tomorrow on my writing blog.

Environmentalists and anyone who visits Florida (isn’t that pretty much all Americans?) would appreciate The Swamp while memoir fans and anyone caring for someone dying of cancer (unfortunately, that might be a lot of Americans, too) would benefit from Walking Through the Shadows. Bottomline, I liked both books because I learned something from each of them.

This entry was posted in Uncategorized and tagged Books, Ecology, Memoir, Reviews, travel. Bookmark the permalink.