Hampshire has entered the modern age: We got a stoplight. 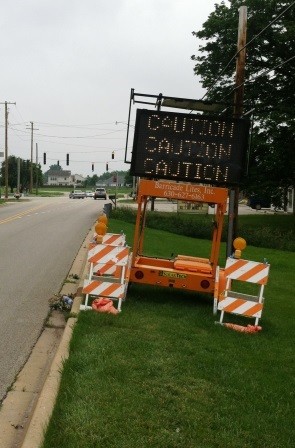 I thought I grew up in a small town. Wadena, Minn., has at least three stoplights, and they’ve been directing traffic as long as I remember, which dates back to when to Bicentennial quarters were minted.

But my home for the past six years, Hampshire has traffic volume that hasn’t required such dramatic measures since, oh, its settlement in 1835. Thanks to massive traffic volume (or, more likely, federal stimulus dollars), the first stoplight in the Little Town in the Middle of a Corn Field became operational Thursday.

[Technically, it may be the second stoplight. Hampshire has a tollway interchange four miles north of main street, and there’s a stoplight which may technically be within the city limits. But I’m not counting that light so neither should you.]

I find the light’s installation to be amusing. Previously, the intersection was a four-way stop, so all drivers — particularly ones familiar with the intersection — know enough to stop first. Now, a block in advance of the light in three directions, enormous flashing signs warn: “CAUTION, CAUTION, CAUTION, TRAFFIC LIGHT AHEAD” as if Hampshire drivers have never encountered a stoplight before.

OK, we may be hicks, but we’re not medieval.

This image is part of the WordPress Weekly Photo Challenge: The World Through Your Eyes. For more images on the theme, click here and troll the comments.

This entry was posted in Uncategorized and tagged Life, Postaday, weekly photo challenge, World Through Your Eyes. Bookmark the permalink.

6 responses to “Warning: Warning ahead”