In the words of David Foster Wallace, ‘maybe dullness is associated with psychic pain’; in my words, ‘this book is a pain in the …’

Can a book about monotony be interesting?

Nope, not if we’re talking about David Foster Wallace’s “The Pale King.” 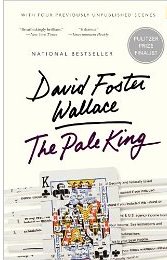 Today’s review is not very complimentary, however. I hated “The Pale King.”

I really wanted to like it. Supposedly, I write like Wallace (read more about that comparison here, ugh).

Wallace was an award-winning American novelist, short-story writer and essayist widely known for his 1996 novel “Infinite Jest.” “The Pale King” is unfinished because Wallace committed suicide in 2008 before completing it. It was among the three fiction finalists last year for the Pulitzer Prize; none of them was actually awarded the prize when the committee couldn’t reach a majority vote.

I wasn’t particularly interested in the Internal Revenue Service, which the novel is about, but because I might write like Wallace and because it was nominated for a Pulitzer, I thought I ought to read it. I was willing to give it a try even knowing it didn’t have an ending.

But “The Pale King” is nothing more than an unedited manuscript. It’s a mess of run-on sentences, positively inane descriptions of IRS regulations and story fragments that go nowhere. Some chapters go on for unending pages while one chapter is only 7 short sentences. If this is how I write, I’m embarrassed.

I’m thinking this is a trick played on us by the New York publishing elite. Half way through this 592-page doorstop, I felt like a country bumpkin invited to a high-class party where the host serves haddock sautéed in toasted bread crumbs, aioli sauce spiked with pickled cucumbers, a cheese course and buttered rolls, all accompanied by a raft of silverware I have no idea how to use. I would have preferred a Filet-O-Fish sandwich — no silverware and easier cleanup. I can imagine the Pulitzer committee looking down their noses at me, part of the common rabble, who can’t pass for First Class at dinnertime.

There are moments of brilliance in “The Pale King,” snippets such as:

… men for whom landings like this yaw-wobbled horror just past are business as usual. Paunched and blotchy men in double-knit brown suits and tan suits with attaché cases ordered from in-flight catalogues. Men whose soft faces fit their jobs like sausage in its meaty casing.

She was maybe fifty, and very thin and tendony, and had the same asymmetical beehive coiffure as two different older females in my own family, and was made up like an embalmed clown, the stuff of nightmares.

After Houston, her favorite doll had been the mere head of a doll, its hair prolixly done and the head’s hole threaded to meet a neck’s own thread; she had been eight when the body was lost and it lay now forever supine and unknowing in weeds while its head lived on.

[Note to those in steerage: Prolixly is the adverb form of prolix, which means “extended to great, unnecessary, or tedious length; long and wordy,” as in “The Pale King” appears to be written in a manner most prolix. Feel like someone’s talking over your head yet?]

But even Wallace’s notes to himself betray the awfulness of the story: “Central Deal: Realism, monotony. Plot a series of set-ups for stuff happening, but nothing actually happens.” He also writes, “bliss … is on the other side of crushing, crushing boredom,” but the only bliss I felt upon finishing his book was a sense of relief, both that I was done and that Wallace is dead so my review won’t hurt his feelings.

By the way, there is no ending (as I expected), and I still don’t know who the pale king is.

There are far too many books in the world that actually tell a story with moments of brilliance and clever turns of phrase. Don’t waste your time here.

Tomorrow: A book I loved, “Butter” by Anne Panning. It has an ending (even if I didn’t like it, I appreciated it).

5 responses to “In the words of David Foster Wallace, ‘maybe dullness is associated with psychic pain’; in my words, ‘this book is a pain in the …’”