Close encounters of a beachcomber

One can drive for miles on South Padre Island’s beach and see nothing but sand and waves. There’s a certain meditative quality to it.

Then, just as big events punctuate the hum-drum cadence of life, one happens upon a real find.

This strange space capsule sits on the beach on the edge of the dune several miles north of the municipality. 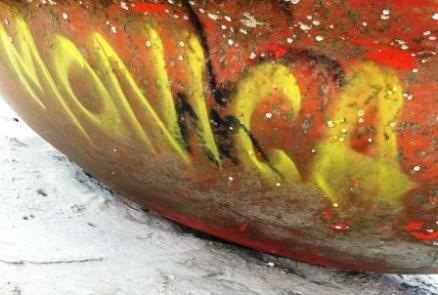 The other side has a message, too.

It might be a rescue pod from a ship, but in any case, it’s been wasting away on the beach a long time. A man was inspecting it as I approached, and he told me it’s been there at least 7 years; that’s when he first found it.

The man (who coincidentally happened to be from Willow Creek, Minnesota) told me someone had glued the crushed cans and lighters to the hull in the years since. I found this community art to be strangely appealing.

The man on the beach suggested we drive a few miles north, and we’d find another bit of community art, and we did. 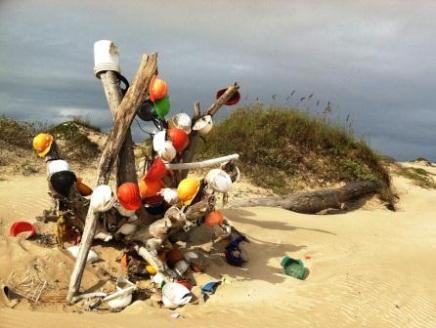 Now one finds a lot of garbage on the beach including abandoned coolers, water bottles and clothing. But construction hats? That’s just bizarre.

Here’s what’s really weird: On our way back, the engine in the Escalade inexplicably quit within yards of the space capsule. It would not restart despite my Beloved’s best efforts. A Good Samaritan in a Jeep with a long tow rope towed us off the beach. While we waited for rescue (our cell phones had no service so we were at the mercy of passersby), the clock in the Escalade gained about 90 minutes (or lost about 22 and half hours, we’re not sure which). Only the battery worked the whole time; my Beloved suspects our fuel pump pooped out, not our electrical system.

So why did our engine quit, right there, next to the decorated space capsule? And if it really was the fuel pump, why did we lose time?

This entry was posted in Uncategorized and tagged Art, Random, travel, Weird Stuff. Bookmark the permalink.

2 responses to “Close encounters of a beachcomber”