Remembering who we remember on this day

School got out. I took a lot of final tests but I did well on all of them. When I got my report card, I had one B for the whole year. That’s good. The day after school got our, I helped Mrs. Johnson with clean-up. I got a jacket and a sock of mine out of the lost-and-found when Amy and I cleaned it up.

Anything else that happened in May was not worth remembering because I don’t remember anything else.

Thank goodness it’s not up to 15-year-olds to commemorate national holidays.

Memorial Day isn’t about camping or rain (which I strongly associate to the holiday, my 15th year notwithstanding). It’s about remembering the men and women who’ve died while serving in the U.S. military. My uncle Byron Kulland died while serving our country, and though I have no personal memory of him and my 15-year-old self might not think so, he is worth remembering. 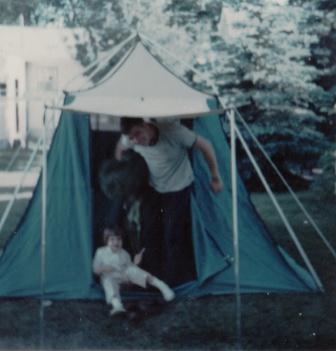 Byron Kulland checking out the tent with his niece.

Here is the only picture I have of him. I was about 5 in this picture so this photo was perhaps taken in my back yard the summer (or maybe two) before he went to Vietnam.

Byron was my mother’s second brother (she had three). I recall a few Vietnamese trinkets he must have sent to his nieces (my mother was pregnant with my brother when my uncle died) but other than that, the only strong memory I have about my uncle is the morning I came down the steps to find my mother on the phone, crying. That must have been the day she learned her brother had been shot down.

A 1st Lieutenant in the U.S. Army, my uncle was a helicopter pilot. While on a search-and-rescue mission on April 2, 1972, his Huey aircraft was shot down and crashed in South Vietnam. One of the four crewmen crawled away from the wreckage and survived. Kulland and two others were listed as missing in action and later, killed in action. (If you’re interested in more details of the mission, Google “Byron Kulland” or track down a copy of the 1988 movie based on the incident, “Bat 21” starring Gene Hackman and Danny Glover.)

Twenty-two years later, human remains presumed to be of the three dead airmen were returned to the United States and buried with full military honors in Arlington Cemetery. Those three were among 58,209 Americans who died in the Vietnam War.

Today, U.S. sons and daughters — among them, two members of my husband’s family — are fighting a war in another faraway country.

To date, 1,986 Americans have died in that war in Afghanistan.

They and the others who have died in service to our country are worth remembering on this day.

The brave die never, though they sleep in dust:
Their courage nerves a thousand living men.

This entry was posted in Uncategorized and tagged Family, Holidays, memories, News. Bookmark the permalink.

4 responses to “Remembering who we remember on this day”