Things are looking up in the dining room

While standing in the cashier line at the home improvement store earlier this month, I found myself behind two guys wearing tool belts who looked like they knew what they were doing.

I was standing there in high heels holding yet another gallon of paint I probably should have purchased the first time I was there. I didn’t know what I was doing, but these two sounded like they spent their days measuring twice and cutting once rather than the other way around.

“Thank God I talked her out of the crown molding,” said one guy who seemed to be referring to his wife.

“Yeah, crown molding is a pain in the butt,” agreed the other guy (only he didn’t say “butt”).

I just shifted my weight from side to side. “Hmm, we’re putting up crown molding,” I thought silently. “Huh. That guy’s wife lost the battle. Too bad.”

It never dawned on my that crown molding isn’t exactly a DIY project anyone can accomplish. 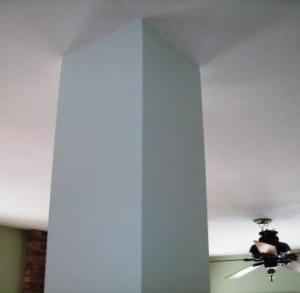 Top of the column after painting but before crown molding.

Over the course of a several more visits to the home improvement store, I learned a lot more about crown molding. It’s a flat board, not a triangular chunk of wood. Installing crown molding requires more than a little geometry. And you tend to need more of it than you think.

But thanks to my dad, I got the crown molding I wanted, and it brings sophistication and class to the plain old columns separating my dining room and living room. Originally, they were painted a reddish purple, but we chose to paint them in Raindrop to match one of the walls in the dining room; the very faint aqua color looks more like marble and the crown molding lends a Greek air to the columns. Here’s the after shot:

Crown molding brings the eye up, and our nine-foot ceilings weren’t emphasized enough in the old decor. 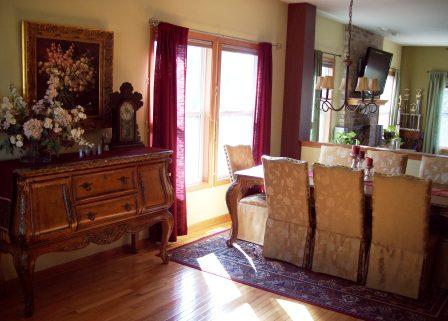 The dining room before.

Why not highlight all that space up there? Besides dressing up the columns, we chose 95-inch curtains instead of the standard 84-inch type, and we hung them outside and above the windows so they frame the windows rather than cover them and cover the outside woodwork. We found fancy finials that echoed the detailing on our dining room table and buffet, and instead of expensive valances, we added a stunning (but much less expensive) wrought iron wall hanging above the rod. 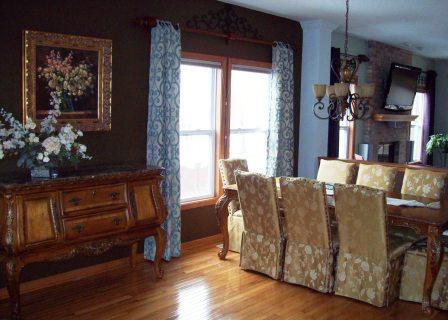 The dining room after.

Check out that Pumpernickel wall color! We dumped the lampshade light fixture for a more suitable, elegant option, too.

While Dad’s muttering while he worked on the crown molding taught me how challenging crown molding can be, it didn’t come close to being as tough as ordering area rugs online and returning them.

Our old rugs on the hardwood were way too red to fit in our new decor. My Beloved orders everything online and though I hesitated, I went along with some rugs described as “tan, ivory and blue.” When they arrived, we discovered they were brown, tan and red, with a smidge of blue. Not at all what I wanted, even when Tyler managed to get the online retailer to offer a discount. After much wrangling (7-by-9-foot area rugs don’t just go back in the box), we returned the wrong-color rugs. We ended up paying $35 in shipping to return them, and we’re still awaiting the arrival of the promised refund in our checking account. Despite all that, we ordered more rugs online — this time from Home Depot, so we could return them there if necessary. 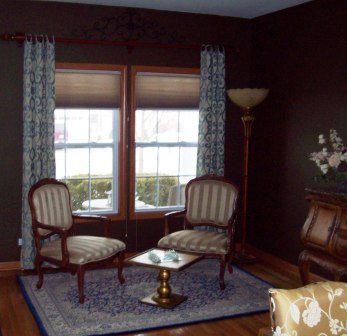 We’re still waiting on the largest rug for under the dining room table, but the second rug design sets just the right blue tone under the conversation area at the front door.

Makes me want to sit down and enjoy a cup of tea. Ahh.

Tomorrow: A clever repurposing of old things in the living room.

This entry was posted in Uncategorized and tagged Before and After, DIY, Home. Bookmark the permalink.

7 responses to “Things are looking up in the dining room”